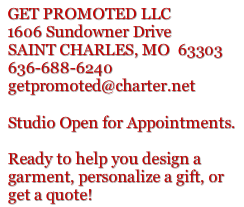 Get Promoted LLC started in 2007 as a result of the economic downturn.  Peg had faced three downsizings in her profession.  The last one affected partner, Diane's job, too, as both gals were working for May Company during the Macy's takeover.  The job market being what it was, it looked like a better idea to learn a new trade than to face an ever growing job shortage.
"We basically apprenticed ourselves to ourselves," explains Peg.  "Both of us have lots of management skills, and were eager and willing to learn something new that would be creative and flexible." 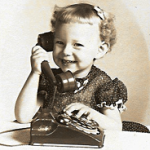 Get Promoted Marketing Manager
Diane Hawn was originally from Farmington, Missouri, but moved in fifth grade to Viburnum  where her father was a lead miner.  She went to college at Southeast Missouri State University and graduated with a degree in Home Economics which she used in business for many years in Southeast Missouri.  She worked for Amana and Panasonic doing microwave education and sales back when microwaves were brand new on the market. She worked in the appliance industry until she came to St. Charles to supervise a collection division at May Company.
Diane has two grown sons that have moved to the St. Louis area recently.  Oldest son, Jay, is a safety engineer with Anheuser-Busch and  is married to beautiful Nikki Stallion-Brewer.  They live in Dogtown.  Nikki works in a family construction company (Mac-Con) in Cape Girardeau.  Younger son, Curt, is a professional musician in the St. Louis area and is well known for his involvement with award winning local band, Kentucky Knife Fight.
Diane is a voracious reader.  Favorite magazine now is Entrepreneur;  biggest disappointment is the lack of content of Readers Digest. Her guilty pleasure is reality TV like American Idol, Project Runway, and even the Kardashians.  Mad Men is her TV obsession.  Diane is in the bell choir at church and really enjoys it.

This is what happens when we work too hard for too long......  Take a moment to laugh with us....

Get Promoted Screen Printing and Sales Manager
Peg Higgins started life in Paducah, Kentucky, but spent 4th thru 11th grade in the Chicago suburb of St. Charles, Illinois.  She spent her senior year back in the south and then headed to college at SEMO, where she was friends with  Diane...yes, these gals have known one another since they were 18 years old.  It was over 20 years between seeing Diane as a college student to ending up teaching Art at the school that Diane's boys attended.  They were re-introduced and haven't stopped talking the past 17 years!  Peg taught Art in Paducah and around the Springfield, il. area.  Peg received training in picture framing with Larsen Juhl in Georgia and spent the next six years managing the Chesterfield Frame Factory.  She loved every minute of working with her staff, but was downsized when the owners dismantled their stores and sold them to a franchise chain.  After a short stint at May Company, she started on this big experiment, Get Promoted.  Peg"s Mom, Roberta, recently moved to the St. Louis area,  She will be 92 in March, and is enjoying life in her new apartment at Aberdeen Heights.
Peg is in charge of all pricing, quotes, and screen-printing.  She keeps her equipment in meticulous order, which is amazing, considering how messy printing can be.
Things you may not know about Peg is that she is an accomplished musician that has played the French Horn since grade school and has a powerful soprano voice which she uses in church.  Bell choir is one of her favorite musical hobbies.  She loves going to the theater and enjoys the Muny season every year.

We understand - We know that the process of preparing and sending your artwork can be a complicated and sometimes frustrating experience. Should you have any questions, or require assistance, please contact us at: 636-688-6240